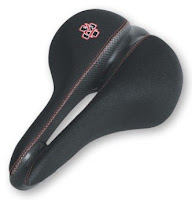 So I mentioned about the problem I'm having with the nose of my Serfas Women's RX being too wide for my comfort in my last post, right?  Well, it's really bothering me.  A lot.  Enough that I don't always like sitting on my bike.  And I like everything else about the saddle from a comfort perspective.  Just not the nose width.  It was a real problem last week when I rode three times in 6 days.  Not as much of a problem if I only ride once or twice a week.  But if I ride more often than that or longer distances, I feel almost like I have bruising where the outside edge of the nose contacts my body.  Ouch. 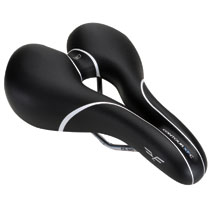 Well, I decided to try a women's saddle by Forte from Performance bike store.  It had decent reviews, isn't too expensive, and looks similar to the saddle that I have.  I had talked with customer service and they gave me measurements that led me to believe that the nose was significantly narrower than the saddle I already have.  So, I picked it up yesterday.  But after bringing it home and comparing side by side, it's basically the same width!  They must have measured the very front part of the nose not the mid section of the nose.  Anyway, this is not going to solve my problem, so it's going back. 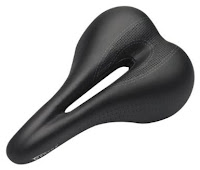 Back to the drawing board.  I decided to email Serfas  and explain my problem.  They suggested that I try the Serfas Niva which they say is similar material, similar back, narrower nose.  I see that they carry it at our local REI, which is right across the street from performance.  I'll stop there when I go to return this other saddle.  But this time I'm bringing my tape measure!!!  I'm not buying it if it's not significantly narrower.  I'm starting to wonder, is it just me?!?  Is my build that much different from other folks??  Or maybe I'm just narrow in the pelvis and should consider a men's saddle? 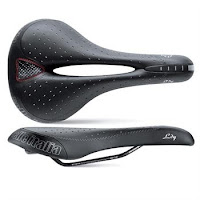 There's one more that I'm going to look at while I'm at REI, if they have it in stock, the Selle Italia Lady Gel flow.  This one has good reviews for long distance riding.  I don't know what the dimensions are though.  Again, I'm bringing my tape measure so I can check a few things out before I buy.

This whole saddle thing is so confusing.  I hope I find something that works for me!
Posted by Unknown at 1:04 PM