This weekend it got cold enough that we decided it was time to hook up the furnace.  Strange thing living here in NM, at least in our house, we need to decide if we want the cooler hooked up or the furnace.  Can't have both.  I also needed to pull out my winter running gear.  It was 32 deg at the start of  my run Saturday morning.

This coming weekend is the Duke City Marathon.  They also have a half marathon, 10K, and 5K.  I'm running the 10K.  Several folks in our running group are doing the marathon relay.  We have a couple running the half.  I don't think anyone is doing the full this year.  This race signifies the end of our running group's season.  We'll take a break as a group and reconvene at the end of February.  Some of us run during the winter, some don't.

I'd like to keep running, but my knee has been bothering me enough that I think I'll take a break starting after the race until I've completed the series of injections and get the clear to run again.  Maybe this time I'll keep some momentum alive with walking and swimming.  Or not.  Guess time will tell.

But as for this week, I've still got a few more training runs.  Packet pick-up Saturday.  And going after a 10K PR on Sunday.
Posted by Unknown at 4:05 PM 10 comments:

While I was in Italy, I got several emails from friends asking if I had seen the latest issue of our local fitness magazine; apparently my photo was in it. Well, someone saved one for me.

My 15 sec of fame consists of a "see-me-orange" shirt with crazy arm warmers and a totally cheesy pose while everyone else is beaming sincere smiles.

I explained my poor excuse for race prep in this post as well as gave estimates for finish times.  In summary, I didn't train properly for this race due to a trip to Italy and also was recovering slowly from some sort of upper respiratory ick. The plan was to start at the beginning, run to the finish, and consume chocolate.  A plan so easy, even *I* couldn't mess it up.

Husband has also been recovering from the ick, but he was about 4 days behind me on it.  He wasn't sure if he was going to run or sit it out.  He decided to run, in retrospect, probably not the best decision.  We met my running partner on this side of town so she could carpool with us.  We got the the site early enough to watch the 5K runners start.  We were also able to find all of our friends who were running and bid them well wishes.  Since we were all running, nobody had a camera.  But trust me, we were able to meet up with everyone intended.  Yay.

The plan was for my running partner and I to run together.  With the caveat that it was okay to split up if someone was feeling really good and really wanted to speed up or really sluggish and needed to fall back. We work well as a team, but always give each other an out.

I was feeling really good and we were running strong, with a pace of ~10min/mi.  At that point, it almost felt like we might be able to keep that up throughout the race, but I guess it was too good to be true.

Reality started to set in.  It became clear that we couldn't keep up that pace for the full duration of the race, and we slowed down to a pace closer to 10:30ish.  This was still good, as it was our original target pace for the race knowing that we weren't going to be training correctly.

Oh, the hot chocolate RV was near the 5 mile point with music blaring and lots of cheering going on.  I appreciated that.

This is where the wheels fell off the bus, at least for me.  I told my running partner to go on without me.  I slowed down quite a bit to a more comfortable pace.  During this time, I made friends with another lady on the course that seemed to be running my same pace so we ran together from there.

About a half mile from the finish line, I saw Husband.  I asked him how he did and he responded that he hadn't finished yet. What?!?  Rut roh!  I guess he started having problems at the 10K point due to the bronchitis(?) or whatever that he was getting over and started walking. 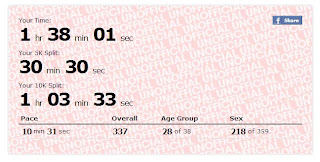 However, he felt good enough to run with me and my new friend at our slowed pace so we ended up finishing together. I was the last of my run friends to finish, so they were all cheering for us at the finish line.  That's one of the benefits of having fast friends! The kicker, my official finish time ended up being 01:38:01, essentially my original target time!  Woot!

Husband wasn't feeling very well, so we sat and rested for a bit.  After resting, we
met up with all of our run group friends and did a little post race shopping. They had women's shirts, but I liked this grey long-sleeve men's technical shirt and got it in a size small.

I now also have the jacket (very nice) as well as the brown and white running hats (technical). I'll be sporting the hot chocolate race stuff for awhile it seems.  What can I say, it was a fun race.

I would definitely like to do this again if they come back to Albuquerque, this time training properly!  The race was fun, the promotional event during the summer was fun, the SWAG (jacket and hat) was great, the finishers mug of chocolate was yummy.  I wasn't a huge fan of the course; I counted 31 turns over the 15K route, but it must have been marked well because nobody got lost.