I ran in a skirt yesterday for the first time this summer. I don't know why I was wearing shorts every time and not skirts.  I guess I forgot how much I like running in skirts.

Sunday we rode 32 miles on bike.  I think I hit the wall at 27.  Those last 5 were not fun.  I suppose part of the problem is that I continue to ride only once per week and really need some mid-week rides to get my cycling fitness up to a decent level.  The other problem may be that we rode at the HOTTEST part of the day.  Next week I have an extra long weekend, hoping for some extra riding to help on both fronts.

Had another good 7 mile run on Saturday. Really looking forward to going 8 this coming weekend. But to balance things out, I had a total failure of a run today.  And by failure, I mean I turned around 3/4 mile in and called it quits at 1.5.  Energy was low and I was experiencing some pain near my right hip (IT band?).  I figured it just wasn't my day.  I'm hopeful that Thursday's run will be better. 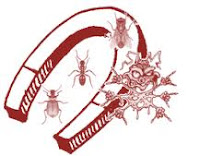 I seem to be a bug magnet.  Even though I live in the desert where there are few mosquitoes, and I put bug spray on before running by the river, I end up with new bites practically every time way more than anyone else that I run with.  It's making me crazy! Is there something else I could do to make them leave me alone? [updated to add:  I've been told it's probably the sand gnats that are getting me, not mosquitoes.]

FIRE:  The latest New Mexico wildfire sprung out very close to where I live. This is the view I had from our hot tub patio shortly after the fire started.  A little too close for comfort. Luckily they were able to get it contained over night. 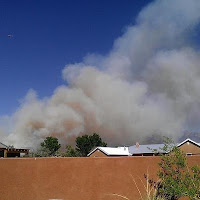 15K:  I signed Husband & I up for the Hot Chocolate 15K at end of September.  I know this race had issues in DC, but it seems to have gone well in other locations.  I've never run a 15K, and I'm excited about it!

BEATING THE HEAT:  It's been freaking hot out. Running in 95+ deg temps just isn't my cup of tea. I finally bit the bullet and started running in the morning before work. Speaking of which, I've also decided that I am *not* doing the Sunday evening race that I mentioned earlier.
Posted by Unknown at 5:07 PM 10 comments:

Thursday I had a good 4.0 mile run with a couple of friends.  But man, it was hot!  I really need to think about running in the morning during the week.

Friday morning I was scheduled to run with my friend, the new runner.  She hadn't had breakfast and just wasn't feeling it.  We ended up walking instead.  She tried again Saturday (after having breakfast) and had a good run.

I was also supposed to swim (yes, I said SWIM) with a friend of mine, but she cancelled.  I could have gone by myself, but I did not.  Another lost opportunity and nobody to blame but myself.  Instead, I came home and started the process of re-purposing my son's bedroom.  I want to remove the dresser and clean out half the closet so I can move my sewing stuff in there.  I put the clothes from the dresser into plastic bins for now.  Got the dresser cleaned out, but that's as far as I made it on that chore for now.  Oh, and I found a whole mess of pocket change in his drawers.  Too funny.

Saturday was a 7 mile run with friends.  It was AMAZING.  I felt good the whole time.  We started picking up the pace at mile 5.  And really kicked it up for the final quarter mile.  Gotta love runs like that!

Went on a "Father's Day Bike Adventure" with my husband on Sunday.  We went in the afternoon.  There wasn't much wind, but again it was HOT.  We ended up doing 30.3 miles which was about 5 miles past the point where I was ready to be done.  I really need to be more consistent with my riding and pick up some mid-week rides.

Thought about running again this morning, but decided that walking the dogs was a better idea.  I think my legs need rest.

I'm contemplating doing an evening 5K this coming Sunday, mostly for fun.  Weather report shows a high of 96 with partly cloudy skies.  Hmmmm.  To do or not to do, that is the question.

Happy Monday!
Posted by Unknown at 5:28 AM 7 comments:

Met a running buddy and other friends for a 4 mile run only to realize that I wasn't wearing my running shoes.  Yes, you read that right.  How does that even happen?  Yeah, it's a long story.  Anyway, my running buddy agreed to follow me home and run from there rather than wait for me to do the round trip or cancel entirely. Run salvaged!

Friday, another friend & I met with a new runner who has been doing the couch-to-5K plan.  This was her first time to try running 25 mins straight somewhere other than a treadmill.  She didn't think she could do it, but she did great!  So exciting to watch the progression of a new runner.  Glad we could help her out.

Saturday, I had 6 miles on the schedule.  Met the group again (this time actually wearing my running shoes - go me!).  My running partner actually did it as a progressive, each mile slightly faster than the one before.  It was the first really good run that I've had for a long time.  Next week, we're aiming for seven.  Go us!

I also attempted a 25 mile bike ride with my husband later afternoon.  However, the wind was fierce, and it was just too much for me.  I decided to bail 4 miles in.  So I turned around, cutting it short at 8.  Blah.  Then on Sunday, I attempted a 16 mile ride with hills.  Went much better than Saturday's ride, but again I ended up cutting it short.  This time because my left hamstring was bothering me, not the wind, and I did make it farther than the day before  (a 12.4 mile ride).

It probably goes without saying that I'm not feeling really good about my cycling progress (or lack thereof) right now.   Tomorrow's a new day though, right?

It strikes me that I have a sprint tri in about 2 months.  Maybe it's about time that I add some swimming in, ya' think?
Posted by Unknown at 6:25 PM 9 comments: 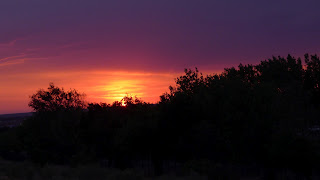