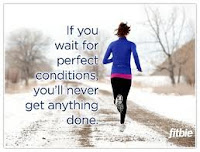 Met my running partner Friday morning for a 3 mile run.  It was cold and windy....24deg with a 18degF windchill factor.  As soon as I got out of the car she exclaimed, "What the H3LL were we thinking?!?"

I'll be honest, that's getting pretty close to my lower limit.  I usually won't go out if the temp/windchill is below 15deg.  What about you?  How cold is too cold for you?

Of course, as is usually the case, running was way better than not running
And when we were done we decided to meet again the next day, same time same place. So I guess it wasn't THAT bad.
Posted by Unknown at 6:08 AM 7 comments:

Guess What I Did Today?!?

It's been roughly 7 weeks since my last run, but as of today I am cleared to try easy running. I thought I might aim for 1.5 miles, but ended up doing 2.0 and then walking a half mile cool down. My knee felt okay the entire time.  Woot!

Turned out to be a nice morning for it also.  It rained last night and the cloud cover kept the temperature warmer than usual for this time of year.

What a great way to kick off my weekend!
Posted by Unknown at 1:36 PM 7 comments:

Hard to believe that I would blog about either one of these topics, much less both at once, but here we go!

White Tea - I've had and on/off relationship with tea where I go through phases of consistent tea drinking and then give tit p entirely.  When my kids were home at Thanksgiving, they were interested in sampling the various loose leaf teas that we have at home.  And this got me more interested in teas as well.  I decided to add to my collection and stumbled apon a discover that maybe you already knew, but white tea is especially good for your health, even more so than green tea!  And I had never even heard of white tea.  So I have one new white tea already and two more on the way.  I'm going to try to consume 3-4 cups of white tea per day at least 5 times per week for about 3 months and then report back on any positive effects that I notice.  Have any of you tried white tea?  What benefits did you notice?

Yoga - I'm actually on day 6 of my recommitment to yoga (via Kate Perry's Namaste Yoga DVDs - a collection of ~22 minutes episodes).  So far so good; I've done it every day for the past 6 days!  I'm actually really enjoying this particular yoga series and the length is just perfect for me even if the episodes are a bit challenging for my yoga-challenged self.  If I can continue to do this every day, that would rock.  However, just like the tea experiment, I'm actually just hoping to accomplish it 5 times per week for 3 months and report back on any positive effects that I notice.

I ended up as a spectator while Husband ran the 5K.  He had a good race with a strong finish and I suspect an age group placing (I don't think there was anyone over 50 ahead of him, but I could be wrong).  He didn't want to stick around for awards though.  For the record, if it ever looks like *I* am going to place in my age group, I *will* stick around, but to each his own.

It was a beautiful day!  I took some photos with my phone.

Our local chapter raised about $26.5K for the Arthritis Foundation.through this event this year.  I really wish I would have been able to run, but spectating was still fun.  I'm hoping for next year.
Posted by Unknown at 3:45 PM 6 comments:

I've decided to try to recommit to yoga and instead of doing long sessions less often, I will aim for shorter (20-25min) sessions more often.

The month got off to a bad start with my back spasm issues, but things are looking up now and yesterday I decided that I felt well enough to give it a go.

What I know about myself is that I need some sort of video or DVD to follow along with.  I wanted to try something different from what I've tried in the past and settled on Kate Potter's Namaste Yoga.  I've actually ordered the full Season 1 DVD set (13 episodes, each is about 22-24 minutes long - PERFECT) and found a few episodes online to follow along with while I wait for my DVDs to arrive.

I have sort of a love-hate relationship with yoga.  For one thing, I pretty much suck at it.  But it does make me feel better afterwards and I know that if I stick with it I will see improvements in flexibility and strength. I've failed in the past trying to do classes - travel time and the rigid schedule make it difficult and feeling like I have two left feet in a class full of graceful students doesn't help my motivation one bit.  I've also failed with longer DVD workouts, I seem to have a lot of trouble making time for them.  But these shorter sessions seem just right from a time perspective.

So far I'm two for two, but the real test will probably be whether or not I'm still doing it a few weeks from now.

I could use some yoga motivation.  If you are a yoga fan, please tell me about your favorite yoga classes, poses, style, DVDs, etc. If you aren't a yoga fan, if you have ideas on how to stick with it anyway, I'd be happy to hear about that as well.

p.s. From a knee perspective, I'm cleared to try easy running again one week from today!  Yippee!!
Posted by Unknown at 7:33 AM 4 comments:

One the positive side, this latest back spasm issue is distracting me from the boredom of letting the injections heal my knee.  I can think of several alternatives that I would have preferred as distractions, but in life you get what you get.

In my adult life, I've been to three different chiropractors.  I really didn't like the first one very much, more of a traditional high impact chiropractic practice that was a little bit scary.  Really like the second one though, he did something more akin to ART and everything was low impact. I always felt better after seeing him and nothing he did was scary. Unfortunately, he has retired and is no longer in practice.  I then switched to someone who is somewhat in between in methods.  She is mostly low impact, not the same as my favorite chiropractor, but much better than the first one.

I had been going monthly for maintenance, but had to cancel my last appointment and simply forgot to follow up later.  With my favorite chiropractor, I never would forget to go.  Since I'm sort of ambivalent toward this one's particular methods, it had't been a priority for me to go.  As it turns out, I hadn't been to the chiropractor for several months when my back spasms hit.  Perhaps not getting regular adjustments may have been a contributing factor.

So I'm back again.  I've had appoints for Tuesday, Wednesday, and then again later today.  On Tuesday, she sent me to a physical therapist for electro-stimulation and heat for my back as well as percussive therapy after the adjustment.  I really didn't like how that stuff felt, but I do think it helped.  Yesterday, I just got an adjustment.  This morning my husband commented that I was standing up and walking with 'almost normal' posture.  That's quite an improvement from where I've been all week, so I think the chiropractic adjustments have helped.

This afternoon I believe she wants to talk to me about setting up an appointment for getting therapeutic massage sometime next week as well.  I think that's a good idea as well.

I think I want to continue seeing a chiropractor on an ongoing basis, but she may not be the right one for me. I hate the thought of starting over with someone new though.  And with so many different chiropractors out there, it's not that easy to find the 'right' one.

How many of you have seen chiropractors?  Have you had good experiences, bad, or a mixed bag?

Oh, and to get closer to topic.  Husband is running a 5K on Saturday.  I'm thinking of either signing up to walk the 5K or signing up for the 2.5K walk that is happening at the same venue. Alternatively, I may just go and be a cheerleader for him.  It all depends on how I feel Saturday morning.  Whatever I do will likely involve race day registration.
Posted by Unknown at 6:04 AM 6 comments:

November by the numbers