or as they say, "What could possibly go wrong with that plan?!?"
Maybe I should spend less time signing up for stuff and more time training.  Ya' think?!?
Posted by Unknown at 5:34 PM 5 comments:

The big training need is to get ready for Pedal Los Pueblos.  Husband & I went out on a ~39 mile ride Saturday.  That's about half the distance we'll need to ready for, but also with hills.  Right now I'm just getting comfortable being on my bike that long.  Soon we really need to add in some back-to-back training days because day 2 is probably going to be the more difficult of the two. Anyway, I took some photos to reflect Saturday's ride.

I have a carrier for two water bottles in back along with space for a small bottle and a large bottle on the frame.  I didn't think one small and one large was enough because it was HOT.  So I loaded my bottles in back.  Next time, I'll probably include a small bottle in front as well.  There are a few places on the trail where it gets very congested, but most of the trail was fairly open so we could ride our own pace. Probably the scariest part of the ride was when we needed to cut through a parking lot because there is an intersection without a bike lane.  Someone started pulling out of the space without even looking my way.  Had what seemed like a close call.  We also had an incident on a small section of road with a bike lane when a car suddenly cut over into the bike lane in front of Husband.  Another close call.  Sheesh.
It was fairly calm winds on Saturday, which always makes for a more pleasant experience.  Can't say the same for today.  Glad we're not riding today, but it probably would be good practice if we did. Speaking of practice, Husband got to practice changing a a tube while out on the trail. And we were able to find some shade not far from where he got the flat.  That made it much more bearable.  As I mentioned earlier, it was HOT. I got to practice at home before we left and it looks like I get to practice again before I head out on my next ride because my rear is flat.  See how I spin that in a positive way? It's practice. Hahahahah.  Not that either of us need any more practice, we've dealt with enough flat tires over the past several years to be pretty good at taking care of them.

Next week we're adding another 5-6 miles to our route.  After that, we'll probably start doing back-to-back days.  There really isn't a lot of time to get ready for this event, but we're trying to build up in a smart way.

And to get ready for all the riding up ahead, I put new tires on my bike.  The ones I had on my bike had been there for 3 years.  Boy, oh boy, the rear tread was WORN.  The new tires are black.  It's weird because I've had blue tires since 2006.  Hopefully they are lucky tires!!  Had a little trouble getting the back tire replaced.  Went through three tubes.  I'm sure it was operator error (mine), but eventually got everything installed, so I'm back in business.

Also, I lied when I said that the live.love.tri was next up. Just registered for a 40 mile bike tour the week prior to that. It will be good training for pedal los pueblos. The goal is to do a long ride the day prior as well. Rollin' Rollin' Rollin' keep that bike-a Rollin'...
Posted by Unknown at 9:36 AM 7 comments: 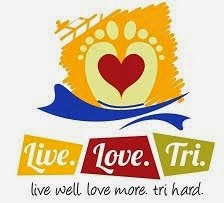 The first is Live.Love.Tri at the end of August.  This is an all-women triathlon, the only one in New Mexico. This will be my third or fourth year competing, I've lost track! Instead of doing the full triathlon, I signed up for the Aquabike division which consists of just the bike and swim. If you would have asked me last year, I would have said that I would never compete in that division, but here I am a year later and it seems perfect given the situation with my knee and foot.  Confession:  I haven' been swimming at all.  I'm not even all that worried about it. I figure I can do a 400m swim without much practice and even if it doesn't go well, I guess it just means that once again I won't make the Olympic team.  Hahahah.

The second is Pedal Los Pueblos MS Ride, a two day event in the beginning of September.  I will be riding a total of ~76 miles over the two days in a hilly part of northern New Mexico.  I'm a little scared, but excited. So far I've raised $0 against my goal of $375. Of course, I just signed up on Monday.   If you feel inclined, you can donate here: National MS Society

Also, I've decided that I don't ever want to do a competitive walk again in my life.  Okay, maybe "never" is too strong of a word.  But I will think twice about doing it again.  I was in so much pain and limping for a few days afterwards. No bueno!
Posted by Unknown at 4:34 PM 8 comments:

Power Walking my Way to the Podium! 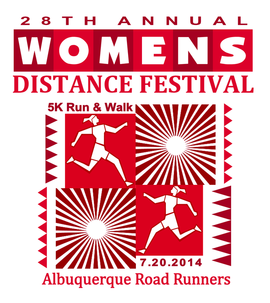 This morning I participated in my first event for the year.  Yes, we're already into July and I'm just now participating in something.  Today was the women's distance festival 5K and I entered as a walker because I'm *still* not running.  In fact, I'm beginning to question whether I will ever run again, but that's a post for another day.

This is one of my favorite events because the all-women nature of it ends up with a very supportive vibe.  Many women who wouldn't otherwise be running come out for this one.  There's always a first time running group that participates as well. I just love that aspect of it

This also happens to be one of the only events in the area that I'm aware of with a competitive walk division. I had noticed from last year's results that the first place walker finished in about 29 minutes (holy smokes, that's fast), second place was 40min or so, and third place was about 45min.  Having timed myself at the track, I had a personal goal of finishing somewhere between 44 and 45 minutes as a power walker and thought maybe I had a chance at third place.  One the race got underway, I noticed a race walking lady about 20 years older than me in a garden hat that was kicking my butt.  I kept her in my sights and found her to be very inspiring for me to keep my pace up.  Eventually I managed to pass her and didn't let up my pace until the end.  This landed me 2nd place overall among the walkers with a finish of 40:33, roughly13min/mi.  Man, that was hard work, but a very rewarding result. I think I'm going to be sore tomorrow.

Another highlight of the morning was meeting up with an old friend.  I had been with her when she ran her very first 5K about 6 years ago at this same event.  She notice that I was participating (albeit as a walker) and decided to sign up for the event again. Apparently this was her first time in a long time to get back to running. Yay to her for getting out there this morning!!!

Overall, this was a great event as always.  I'm glad I participated.  I really surprised myself with my power walk pace this morning and it was nice to take home some bling! Now I'm seriously considering taking up power walking.  I don't think there are many events with competitive walking around here though, so this might end up being a once-a-year thing for me.  Okay, actually, I doubt that I'll take up power walking, but I probably *will* compete as a walker again next year. For the most part, I'm planning to put my energy into cycling; it's a lot more fun than walking.

Next up: Live.Love.Tri at the end of August....but I signed up for the AquaBike division this time.  That will be another first for me!  Stay tuned!
Posted by Unknown at 10:08 AM 19 comments:

Celebrated Freedom on the Fourth by going for a 28 mile ride with husband.  When we got back to our street, he continued on for an extra 10.  That was a nice way to ride together even though our distance targets were not the same.

I'm 80% certain that I want to do the Pedal Los Pueblos MS ride in September.  It's a two day ride with a variety of distances to choose from each day. Assuming we do it, I will choose the 36 & 40 mile routes for a total of 76 miles over two days. That's far enough to be challenging, but not so far that I'll hate my bike afterwards.  It's a hilly course, so I need to work on climbing.

Similarly, I'm 80% certain that I want to do the Day of the Tread half century. That one is at the end of October, which is an absolutely beautiful time to ride. That route also includes climbing.  Do you sense a theme?

This morning I went out on a short 8.1 mile ride.  Made sure to do a route with some elevation gain.  It was a nice morning.

Observation that made me chuckle this morning: all of my cycling self portraits tend to be similarly off center.  At least you get some idea of what it looks like where I ride.

I'm really trying to LOVE cycling.  Not quite there...yet...but almost.
Posted by Unknown at 8:16 AM 5 comments:

1) I tried to make a healthy version of chocolate peanut butter no bake cookies.  The healthy version had no added sugar or butter.  The healthy version also did not taste nearly as good.  One of the ingredients was unsweetened almond milk. I bought way more than I needed, so I decided to add it to my fruit smoothies instead of water.  YUM!  So much richer in taste, and theoretically good for me too.  So something good came out of the experiment after all.

The first half of this year was a tough one for me.  I haven't shared all of the details but some of the lowlights include the death of my mother, a less-than-ideal oral surgery that required a follow-up procedure, and the elimination of my job at work.  Oh, and while this was going on, I suffered a micro-fracture in my right foot that took running-to-maintain-my-sanity completely out of the equation.

I'm happy to say that while I don't know exactly what the second half of the year will bring, I do know that it's off to a good start. Today is the first day of my new job as a freelancer as part of a new business initiative at at work.  Yesterday was the first day of my month-long summer class at UNM. I have the first of my final two (fingers crossed) appointments to finally finish the work in my mouth scheduled a few weeks out.  And I am actually registered for an event, albeit as a walker, for the first time this calendar year.

It's a humbling reminder that life is a journey.  Sometimes you have to hang in there and take every opportunity to add value in the very moment you are in as an investment in your future.  And have faith that things will eventually settle down and work out.
Posted by Unknown at 11:52 AM 8 comments: