Joined up with the running group again last night. The workout consisted of "jogging" 1.2 miles over to the hill base, 6x600M hill repeats, then "jogging" back to the store. I didn't wear my Garmin, but the group's idea of jogging and my idea of jogging are two different things. I fell back with one other lady who seemed to be struggling to stay with the group. I told her they'd still be there when we got there, and suggested we just go easy like we're supposed to.

It's no surprise that I was one of the last ones to finish, but I found the hill repeats to be fun in a sick and twisted way. Next week we're increasing the repititions to 8 and I'm actually looking forward to it.

Afterwards, I spent quite a bit of time thinking about my approach to training. Pretty much all of my workouts have been based on building endurance. For an entire year I've been going for distance, not speed. Case in point: I had planned on getting up early this morning, swimming at the gym, then coming home for ~30 easy miles on the bike. Purely focussed on endurance.

I think it's time to add in some speedwork. This is not to say that I should throw out endurance training, but I'm ready to add in some focus on speed. 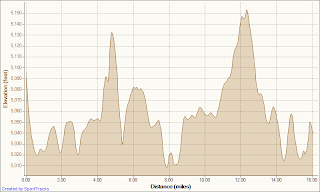 And with that, I devised a new plan for the day. No swim. One bike loop (~16miles) with hills. Push it. No stopping!

The route I chose is not super hard, but challenging enough to make for good practice conditions for the hilly sprint/oly triathlons that I have on my calendar. 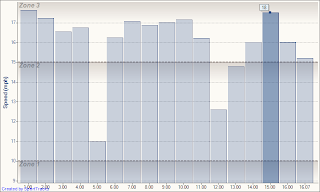 I'm all giddy with the results. I'm no speed demon, but this is particularly fast for me. I'm even okay with my speed up the hills because I know I worked hard.

I'm excited to be rework my training plan for the next few weeks and see what happens.
Posted by Unknown at 9:25 AM