Up in Smoke: While parts of the country are dealing with flooding and/or too much rain in general, we're dealing with the opposite, drought. So far we've had less than a quarter inch of rain since the beginning of the year. Granted, we usually don't get too much rain, but that is a ridiculously low amount. There are already several wildfires in the area, so over the past week, all of the wooded running trails have been closed down due to extreme fire danger. That makes me sad. We can still run on the paved trails though, which is good. I'm thinking that it may be time to try a rain dance....

Who's on First?: Getting ready for my bike ride yesterday I realized that my front tire was flat again
so I decided to fix it properly rather than top it off and hope to make it through my ride. Flipped my bike over, found the offending thorn and removed it from the tire, took off the wheel, took off the tire, removed the tube, replaced the tube, started pumping it up. Hisssssssss. What the?? Then I realized that I had put the bad tube back in, the new tube was still neatly wrapped up with a rubber band on the ground! Finally got the new tube in, and the tire inflated, and was on my way. But geeeez, am I a moron sometimes or what?!? 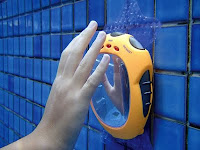 Splish Splash: If I do sign up for the Patriot, it's a seeded swim time start, so I need to submit a time. Timed another 400 in the pool this weekend. Two weeks ago, I got 9:00 even. This week, 8:59. Those aren't stellar times for someone on a high school swim, but for a middle aged recreational triathlete, not so bad. Hey, I'm consistent if nothing else!
Posted by Unknown at 5:56 AM